Toothpaste as we know it is a relatively recent invention. But that doesn’t mean humans have gone millennia without brushing their teeth! In fact, ancient societies thought up numerous different tooth cleansing recipes over the years.

However, these historic mixtures are a far cry away from the blend of fluoride, gentle abrasives, humectants, flavorings and detergents we’ve come to know and love today. To our modern tastes, many of them were odd at best and disgusting at worst.

Curious about what humans of the past used to maintain their dental health? Keep reading for a back-to-school history lesson to find out!

Going Back to Ancient Egypt 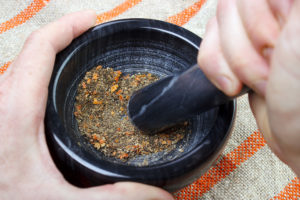 The Egyptians are known for a lot of things but you might not have known toothpaste was one of them. In actuality, the mixture was really a tooth powder and consisted of:

Historians believe they were using similar mixtures to clean their teeth as early as 5,000 BC, however this recipe is the first recorded and dates back to 4 AD. Though it probably caused significant gum bleeding and irritation, it is thought to be the most effective historic dental regimen used until nearly 100 years ago.

Before our ancestors created modern-day toothpaste, they went through quite a few strange trial and error recipes first.

The ancient Greeks and Romans’ formula featured a charming blend of crushed bones and oyster shells. The Chinese used a less offensive mixture of ginseng, herbal mints and salt. Other common ingredients humans tried included ox hooves, pumice, brick dust, burnt eggshells, ashes and pulverized charcoal. In other words, lots of things you probably would never want to put in your mouth.

In more recent centuries, people continued the search for the perfect paste:

Thankfully we’ve come a long way from burnt breadcrumbs and bleeding gums. Humans of the past may not have figured out the right dental care mixture, but they did understand the importance of clean teeth and fresh breath.

Here at Colorado Dental Group, we’re happy to be living in the 21st century with our wide selection of contemporary, effective toothpaste options!