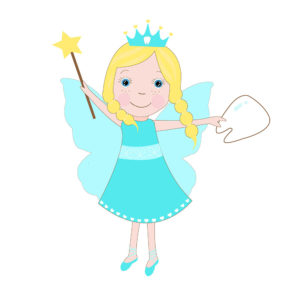 Little is known about the Tooth Fairy’s routes. While most folk tales are easy to trace and have been around for years, this isn’t the case for this dental deity.

Since National Tooth Fairy Day is 2/28, we decided to pay her homage with this timeline of her origins.

Speculation says a British custom may link to the Tooth Fairy. Passersby would occasionally leave “fairy coins” for sleeping servant girls, though this theory is missing any relation to teeth. Traditional Irish tales talk of fairy changelings, which occur when fairies break into homes in the night and swap a sleeping human child for a fairy. When their kids misbehaved or got sick, some Irish parents believed this wasn’t their own child, but that they’d been duped by a fairy. Placing a tooth near a sleeping baby was believed to be an effective deterrent.

In Venice, after kids’ baby teeth fell out, a Santa-like individual would bring them a small amount of money or a present. In a French tradition dating back to the 19th century, the Virgin Mary would appear and switch out lost baby teeth for treats.

The Most Likely Origin

An 18th century French play called “The Good Little Mouse,” tells the story of a good queen who is jailed by her malicious husband. During the queen’s imprisonment, a mouse appears before transforming into a fairy. The fairy whacks the king over the head and his teeth fall out. The fairy hides the lost teeth under a pillow and tricks the king to his death.

This French tale left a series of Tooth Fairy news in its wake:

During the 1950’s, she really picked up steam. This decade was the aftermath of WWII, an era of wealth and a kid-centric view of families in American culture. It’s also the decade when Peter Pan and Cinderella were released, and the Fairy Godmother and Tinkerbell created a fairy obsession.

She Adjusts Her Rates as Needed

Today, the Tooth Fairy is a prominent piece of the American childhood. She has increased her prices to reflect the worth of the dollar. Prior to the year 1975, kids received around 15 cents per tooth, but today they get an average of $3.70.